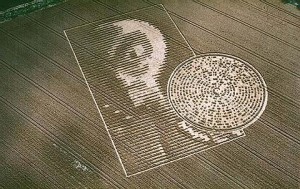 The binary disc decoded: “Beware of the bearer’s of gifts and the broken promises. Much pain but still time. Believe there is good out there. We oppose the deceivers. The conduit is closing.” The window: 1987-2037; the ‘shift’ between Piscean & Aquarian ages.

It was February 13, 2001 sometime around midnight in Phoenix, Arizona. I’d just gotten horizontal after an evening of chatting with folks on SpiritWeb about the Ashtar Command and what the ‘contactee’ experience was like for me. It had been going on for decades, since childhood, with no sense of malevolence whatsoever.

Lying there in quiet contemplation, all of a sudden I felt the transition between worlds that has become so familiar over the years. It’s like being freed from one world to enter another accompanied by a definite shift in the sensation of vibration. I’m sure its subtle, but inside it feels dramatic. There is a sound that is beyond hearing that accompanies the shift. It feels like a wind at my back, catapulting my relation-ship beyond the ocean of emotion.

This one was a bit different, though. My focus seemed to expand and contract simultaneously. I was fully conscious and it felt really strange. The practice of ‘seeing’ is much like scrying with a mirror or looking at an image that has a 3-D effect, gazing without looking intentionally. Years later in DMT – The Spirit Molecule I read accounts of folks who tried to explain their experience and they seemed to draw upon the same kind of explanations for their non-linear experiences.

I found myself in front of a large group of folks that looked they came from across the galaxy; so many varieties I was taken by surprise for a moment, but I have to say it felt quite natural and normal. Then my consciousness shifted again, into the ‘performance mode’ where I was able to observe yet another part of me was in charge. I was performing as a facilitator for the meeting, feeling like I was in complete charge.

As my focus developed and dissipated, I could tell I was on board a ship of substantial size. Sounds like a paradox, huh? Developed and dissipated… but that is how it seemed. I was in a large meeting room that reminded me of a lecture hall from college, with several hundred in the audience. This audience was not your standard student body though; far from it. I had simultaneous questions as I was ‘performing’ the emcee function.

There were dozens of different races represented in the group, too many to recall them all, but there was a sense of unity amongst them that felt familiar for some reason. I felt confident in the plethora of participants and the myriads of systems they represented, all members of the Galactic Federation. I understood the latter without question. Although there was no obvious announcement of their affiliation, the sense of unity was profound and complete.

The exact details are too cumbersome to elucidate here now, but the focus of the meeting was to go over the agreed upon processes, protocols, rules and responsibilities of ‘First Contact’ on Earth. It was apparent the process had been going on for some time; no exact date for establishing a ‘time and place’ event. Truth be known, it started millennia ago while humans were just beginning to evolve on their own.

It was time to begin the strategic actions to bring consciousness among humanity to a new level. They had advanced to a point of priority for planetary survival. It would become necessary for many kinds of open contact to occur. Humans were still too projective with the energy and they had not learned how to listen, so many methods and options were to be discussed. The 2012 Winter Solstice was one of the points of order under discussion, when the awareness of humans would reach a ‘tipping point’ in the process.

That may seem like a simple concept, listening, but the depth of the listening is what enables the interdimensional travel beyond the linear frameworks that humans have developed. You might recall a line in one of the favorite books among humankind stating, ‘for those who have the ears to hear and the eyes to see.’ When consciousness shifts, so does one’s ability to become aware and perceive.

One of the ways this was to be accomplished was the voluntary incarnation of some of the members of the Federation, developing as normal humans within the population yet being able to accelerate the advancement of consciousness along with the natural development of the human system. I knew that to be true for myself, but I longed for others like me to join the party. Most of the time the ‘incarnates’ are unaware of their true identity for many years, following their passion and purpose like an internal road map. 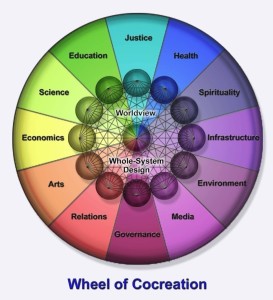 Only after a decade of holding this within and, although I’ve been quite outspoken about my experiences, this one has not had the ears to hear until now. I have witnessed the growth of listening and as we approached the tipping point, (Winter Solstice of 2012) where consciousness has been expanding globally to understand the shift.

The next 25 years are focused on implementing the garnered awareness into existing systems, across the spectrum. The Co-Creators wheel that Thrive and The Shift Network use is an example.

Now since Jose Arguelles is gone, it seems time to share and take my chances. He wrote a wonderful reflection in an event journal I kept during the Prophets Conference in Phoenix back in 1997, perhaps the beginning of ‘Zen of the Clean Wave Form’ he referenced in his work later. We had many conversations about the transition of the ages and the wisdom necessary to negotiate the change into the New Time.

I’ve had a few conversations with others over the years, but their self-importance and conspiratorial positions simply do not support the Galactic Federation’s agenda as I know it. It is a New Time where consciousness is key and collaboration imperative. Pointing fingers and sharing disturbing references, true or not, only serves to maintain separative notions. In my humble opinion, that kind of behavior is subversive and treasonous to the spirit of Truth.

Another example of Galactic Federation workers’ results, no doubt some aware of their roles in the development, is the ISO 26000 Social Responsibility Standards. This is an example of how representatives from over 90 countries came together with a single goal in mind and created a document that can be used for moving humanity forward expeditiously. However, it is an ‘intentional’ document, one that employees of major corporations can use to encourage their leadership to be better planetary citizens. It is practical and pragmatic.

Stay tuned for more. Look for me at the Contact in the Desert event coming up in August. I won’t be on the schedule, but I will be there. Here’s a review of last year’s event for me. A point of perspection dances in the balance of the seer’s vision. One does not need to be an atheist or religious to find meaning for oneself in life and meaning for life in oneself. I share much more in the book Zendor the Contrarian.