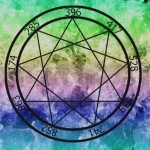 Humans are such strange creatures; so fallible. We dance about, scream and shout and expect our inexperienced and traumatized rantings to overshadow everything. Whether it be a contact experience of non-linear and non-local nature, an NDE (near-death experience) or STE (spiritually transformative experience); they all have unique and similar responses in the consciousness of the individual.

Let’s look at the psychology within the science of harmonics, frequencies that produce resonant fields of varying strengths that apparently are an inextricable part of the ongoing contact experience. We carry our demons, those things that keep us from center and a harmonic experience of life.  They manifest in a variety of forms in our internal experience across the gamut of entheogenic to sacred ritual to even so-called ‘abduction’ experiences.

The experiences are very real for the one engaged and there’s no convincing otherwise at the time. Over time and with considerable reflection, study and personal transformation the conditions and interpretations change. It’s all do to frequencies and the ebb and flow, the rise and fall of their resonance within the linear human experience. We attract what we believe strongly, until we don’t. We see within what we fear without, until we ascend to the next frequency or level of consciousness.

Each level of consciousness has its own particular angels and demons, if you will, the way-showers and the testers to see if you learned. This is consistent with mystical practices from ancient texts. All things ascend from chaos toward the order of the universe, the advanced consciousness permeates All That Is. And now for a message from our sponsor:

Perhaps as we grow in the knowledge of the order of the universe, we’ll also understand the predicament we put ourselves in by the clenching of our hold on particular belief systems. We are usually unaware of them until we have to face our creation. Then there is a choice as to the ability and capacity to let go and rise above or continue clenching. The latter usually produces undesirable experiences that are full of doubt and fear in all our imaginings, including the perception of interdimensional contact.

There are reports of malevolence amongst the rank and file of extraterrestrial encounters. It’s apparent that these things may indeed be possible, based on human perspectives, because we are conditioned into the notion that killing someone or something is perfectly normal. It isn’t. No where else in the universe of evolved planetary systems capable of star travel are any abhorrent activities even close to manifestation. They just don’t happen. It’s a frequency thing.

The frequency of consciousness it takes to understand and utilize universal laws in order to be capable of star travel is incapable of doing harm, period. Earthlings are still barbaric in the over all scheme of things, unwilling to get along and share in the sandbox of living on planet Earth. This is why so many of the contactees and even military witnesses have never experienced any malevolence from any encounter. The shutting off of the ICBM silos in the 60s is only one case in point. Their (off-planet folks) edict is ‘do no harm,’ kinda like the original Google motto.

There is encouragement from all levels of consciousness to ascend toward peace and harmony among people and planet, but we have to make those choices here and now… today… in this moment. That takes faith, love and trust; something many would attempt to destroy if given the chance because it causes their command and control environment to falter and loose effect. We owe ourselves the opportunity to consider and challenge our false belief systems. We won’t know the what can be until we consider being free of what has been. It’s a personal choice.

More recently the CE-5 events are an attempt to create an atmosphere of openness for contact. Other organizations are cropping up in an attempt to collaborate with contactees to help make sense of the scene. There are even frequencies recently rediscovered that apparently assist the process on a personal as well as group experience when intent and purpose align. Solfeggio tones are quite profound to experience, especially in group meditations. Contact has even been known to occur during such. We just experienced it in one of the groups I facilitate currently.