Intelligence conveys that Ufology has long been plagued by the NHI side of the coin, beyond the nuts and bolts or the 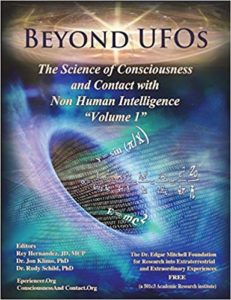 tangible evidence we tend to seek. The physical evidence is something we can touch. It’s real to us. In more recent years the non-physical is becoming just as important, though the mainstream Ufologists tend to dismiss it.

In the last decade efforts have been made to investigate the experiencer side of the coin. FREE’s surveys and book Beyond UFOs provides a great deal of data, though it is nearly all subjective and contributing authors are still searching to turn theory into reality. We all do, yet how to we manage the information effectively?

Most experiencers have non-physical events, that which we might call ‘multidimensional’ in the sense that a variety of phenomena occur within the consciousness of the individual across a spectrum of worlds. It varies in style and type across what are being called the ‘contact modalities’ in one study, a collection of surveys designed specifically for experiencers. As crude as the survey may be, the data collected indicates much more is happening than Ufology, in general, has been willing to acknowledge.

Whether the details of the surveys are incontrovertible isn’t the point – intelligence conveys meaning. There are enough details and similarities within the ‘experiencer community’ (even though there really isn’t one) that notice needs to be taken. Kaku’s statement about the burden of proof is certainly inconsequential in such matters, but his mention of higher-ordered civilizations might cause us to explore further. What would a Type III civilization behave like toward the lesser evolved?

Further, what about those who are non-corporeal and ever-present be like?

Shakespeare certainly delivered esoteric knowledge in his works, perhaps garnered from another world or non-physical consciousness of his time. There are rumors of Francis Bacon and St. Germain that still reverberate in the metaphysical community. Who really knows? The interesting fact is that both are still referenced today. We have a history of ‘spirit’ communication and what has been called ‘channeling’ spanning millennia. Those throughout history have usually been condemned or even killed as a result of human fear and superstition.

Can we still allow fear and superstition to rule our modern world? It seems so, even in light of the scientific advancements of the last half-century or so. The intellect is ahead of the societal trends, though the population is being educated by modern mainstream media. The recent releases of UAP footage is only the beginning of a massive change of awareness. Even in spite of that are the religious superstitions that abound from those who cannot comprehend change, projecting the idea that ETs are demons. That is just nonsense to the rational mind.

In my personal experience, until recently, I’ve not seen much mention of Seth’s information for a long time, a work that came through Jane Roberts decades ago. I did not realize how much of an impact it was for me, settling in the recesses of my memory and mind and trickling out over the decades. Of course channeled material is always a bit suspicious, however, the truth for each individual can be felt beyond those suspicions. This is a rather long listen, but worth the time….

What prompted the revisiting was a dream I had yesterday, where I encountered an individual 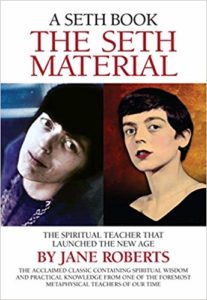 who was to introduce me to a group of ‘others’ who were working in other realms, what most would call ‘ETs.’ Most ‘seasoned’ experiencers have at least semi-regular dreams that we know are more, sometimes completely lucid and fully participating as though we were awake and aware. This was one of those kind of dreams for me.

The setting was a kind of boardwalk type of area with open shops and cafes all around, knowing the ocean was just beyond its boundaries yet still out of sight. I was led to a particular shop that had a mixture of artifacts on shelves and racks of colorful attire arranged on the floor space. Four individuals stood out, in what appeared to be white costumes with darker fabric accents, like you’d see featured on performers or band mates from the 60s TV shows.

There were three male and one female figures. As we approached they were gentle and personable to the extreme, even felt like I should know them from my past somehow. I still have this question of ‘who am I?’ that rolls around in my head during these kinds of events. It’s obvious I’m not ‘just’ human. Intelligence conveys much more. The female, as though she heard my thoughts specifically mentioned the name Seth as an identity closely related to me, though I didn’t quite understand how until listening to this material. It relates to many things I see being discussed in the quest for understanding multidimensional consciousness, space and time today.

To continue in some sort of logical progression..

I guess since first being introduced to it so many years ago, I’ve quested for a visceral understanding, an experience if you will, because of the profound resonance I felt with the material. Be careful what you ask for because it can get very intense. The journey, excruciatingly hilarious at times, has been full of magic and mystery that seems to unfold from within the experience itself and spill out into waking reality. It leaves reference points that eventually connect with others as questions rise to questions and the answers, well, they often leave me feeling inarticulate.

From Grant Cameron via FB… Understanding this will start to explain what is actually behind the UFO intelligence. It also matches with what Josef Ronan’s being said, “The way you see us is defined by you…When we visit your world, we temporarily have a physical body defined in a certain way, but it is not the only form, or our original essence, in our dimension, there is no need for a physical body defined in a particular way as in yours.

“You share the definitions of reality that are given to you, but you are not yet aware of it.” Josef’s words also reflect the understanding of what intelligence conveys and what we might call cosmic consciousness condensed into form, or at least that’s my contribution. We choose how we engage it, always; it is how we create or contribute to the whole. The more we realize those choices are not limited, perhaps we’ll see that the need for fear and repression subsides. What often happens when one begins to explore what Jane (Seth), Josef and others are saying are moments of synchronicity and an elevated sense of joy, when we can acquiesce to the flow of energy.

When we are unable, there is a sense of friction that builds, the mind goes numb and fear takes over, stifling any opportunity for deeper connection with an expanded reality. Most initial experiences with ‘other’ intelligence cause a momentary clenching of the body’s nervous system. The choice to breathe through it and open one’s senses without expectation resolves in truly magnificent events.

Ufologists tend to see things through few lenses, which makes the cross-referencing of material even more critical to the seeker of truth. The latter goes beyond just the truth of Ufology because the ‘field,’ as Lynne McTaggart called it, encompasses our reality, not just a small sliver of it. Viewing data and information though narrow slits might work well for physics, however, our experience of living is so expansive we have just scratched the surface.

Seth’s information, whether we are aware of it or not, has influenced and entire generation of explorers in consciousness and the expanded reality Ufology now has to grapple with in 2020. There is too much information from modern experiencers that warrants consideration and even investigation as to how close these initial communications turn out to be true. We’ve viewed the ability to communicate across boundaries as pseudo-science or even dismissed it entirely for decades, even millennia, yet it persists nonetheless.

Nuts and bolts Ufologists tend to dismiss the esoteric or non-physical and the metaphysical out of hand and/or discredit or disavow those who have a natural ability to move beyond the confines of our material world. We have records of those able to do it throughout history, yet we generally only refer to history. To bring it into the present means we have to admit it is real. How difficult is that for modern explorers who are genuinely seeking better ways to understand the phenomena and the risks involved? Reality sucks sometimes for those who deny it.