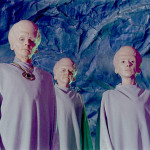 The second Contact in the Desert event at the Joshua Tree Retreat Center was held this last weekend. Attendance grew to well over a thousand people in spite of the sweltering heat. When asked about possible date changes the event organizer, Paul Andrews, stated that the reason Perseid Meteor showers are most visible then. I’m not quite sure what that has to do with ‘contact’ but suffice it to say the dates will probably remain the same for next year.

Speakers presented on a varied of topics and you can research that on the Contact website.Since I know most of the presenters and am very familiar with their work, I spent most of my time among the participants to get a feel for the ‘common man’s’ observations and reflections on the subject at hand. From the queries I made, there is a vast array of perspectives and revelations (so to speak) being promoted, but not much is being done to query the crowd or seek out the experiences of real contactees. There is a lot of talk about consciousness, but no opportunities ti explore aside from the limited number of devices provided by a few of the vendors.

There was a surprise visit by one of the wayshowers of the consciousness movement, 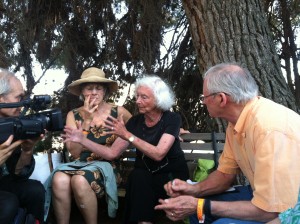 Barbara Marx-Hubbard, who happened to walk in and sit a few feet away, just before a small cadre of folks gathered around her for a short discussion. it was obvious that she was unfamiliar with advanced non-human intelligence, but she spoke of the need for a collective gathering around the possibility of open communication. Later in another short chat she mentioned spoke of a woman who had a large following in Canada and claimed to be a mouthpiece for the universal feminine principle many, many years ago and she thought it was a cult. The individual was part of a mass abduction in 1973.

The point regarding the latter is that expanded or cosmic consciousness can present itself through a variety of forms and sources, from crop circles to ‘channels’ that perform specific tasks for communicating information humans may not quite understand yet. I found it interesting the Ms. Hubbard could not see the significance of her own cult, but it was not my job to propose that view. Regardless, the worlds are bridging and the fact that she was at this event shows that walls are coming down and people are beginning to recognize the significance of non-human interactions. Many of the attendees I spoke with reflected the same and were frustrated that more focus is not on the communications that have been taking place.

In all fairness the groups that were assembled for the purpose of sharing experiences were littered with stories that would have taken a master coagulator to find the common thread in them. Most of them were related from a very human-centered and fear-based perspective. The obvious reflection was we fear what we do not understand and the interpretation of experiences is through a very linear lens. More experienced contactees argue the point that no fear is necessary and our view through that lens is extremely skewed and simply incorrect. The simple notion that everyone I spoke to agreed upon was that we are cosmic consciousness condensed into form becoming aware of the fact.

The expansion of that simple notion spans myriad places, spaces and realms of consciousness across the entire electromagnetic spectrum. The scientific discoveries that back up the notion of multiple dimensions and attending bodies (part of our multidimensional self) are beginning to bleed over from astrophysics and quantum physics. Questions and theories viewed through linear lenses seem to skew the view intended by the above-human intelligence. There seems to be a general consensus, though, that non-linear and non-local experience is necessary in order to have a better view of the big picture, incapable of being seen let alone understood by those who have not entered the non-linear and/or non-local worlds of consciousness. We need ways to create opportunities, safely, for folks to have experiences. We also need to have better conversations about them

In an effort to continue the growth of UfologyPRSS Blog I reached out to several noted authorities and old friends and invited them to write for us. Many agreed to provide material and to review existing material, written and video, that is on the Web at time. We’ve assembled a huge variety of feeds from around the world and many seem to have conflicting stories or present skewed views through very human lenses. We hope these new additions will help to develop better discernment tools for the material. Not everyone has a pure agenda for getting at the truth and whenever profits are involved you can be sure there will be controversy and withholding of truth. Our job is to share what we find.

In the future we look for open conversations that focus on the development of situational protocols that include tools to discern how the experiencer is interpreting their experience in order to get a more objective and clear perspective or the purpose. Apparently information from trusted sources indicates that human ‘spiritual’ awareness still isn’t congruent with cosmic consciousness (soul) in that we think we have a choice in our experiential timeline. Abductees complain about being taken against their will but give no credence to the possibility that there is another timeline they have no knowledge of, one they agree to participate in before incarnating here on Earth.

What do you think? Please respond below.

Zen is an author, coach, educator, facilitator aka 'possibilities coagulator' with an MBA and MA in Organizational Management. Curator for UfologyPRSS and blogger for UfologyPress he has a penchant for asking questions and presenting poignant points to ponder.