UfologyPRSS curator, Bruce ‘Zen’ Benefiel, began his interest in Ufology very young and not because he was merely curious. Although he did find the early sci-fi television shows and movies intriguing, he had another side of his life that he kept hidden for a long time. He experienced various forms of contact when he was a youth and they continue to present day.

Just after his eighth birthday he awoke in what he thought was a dream, hovering in the upper corner of his bedroom. He watched as his body got up, opened the window and climbed out. He passed through the wall and continued to observe his body walk across the neighbor’s back yard and over to a fence surrounding a 10-acre pasture. He climbed the fence, began walking out into the field and started rising up into the air. The ‘observer’ looked up to see an orange cigar-shaped cloud, looked back at the body rising up toward it. The two converged as they entered the cloud together.

That ‘dream’ repeated about once a month for about two years. Occasionally he would wake up with a nose bleed, but for the most part he was excited at the prospect of returning. There was no sense of danger or fear whatsoever. It wasn’t until he was introduced to Ruth Montgomery’s Strangers Among Us at 23, did he put it all together. According the book the orange cigar-shaped cloud was the most common contactee experience in the Midwest during the late 50s and early 60s. Now being the curator of UfologyPRSS.com allows him to share his passion beyond just sharing his story.

His life story, incredible as it may be, has been met with the typical highly skeptical views of others yet he hopes his openness will encourage others to come forward. He’s been around the ufology field and events for decades, known for his colorful attire,  enjoying friendships with many old-timers and new-comers alike.

Many feel like Dr. Who at times, peering out of the Tardis to investigate what the heck we’ve gotten ourselves into on this fine journey into the unknown.

Started college at Ball State University with honors on a pre-Med program, switching in his second year to Psychology with a minor in Comparative Religions after a near-death experience. Dropped out mid-way through, got married and finished a Bachelor of Science in Business Administration a decade later while working for an aerospace company in Phoenix.

While working as a production control coordinator for Allied-Signal Aerospace in 1988, he founded Be The Dream LLC as a vehicle to promote holistic understanding in business and personal achievement. Years later he founded Team Partnering LLC to continue work as a partnering consultant and facilitator for large building, road and bridge construction projects. Father of four and church Elder, he was divorced later the same year.

Created ONE WORLD television show and produced over 100 shows in the early 1990s. The show featured cross-cultural and multi-disciplined guests discussing inner and outer relationships in the process of overcoming common fears in life. During that period he also served as a liaison for the Phoenix Indian School Preservation Coalition, a Native American effort for park design inclusion.

Zen is an international presenter on holistic project planning. After teaching for several years he 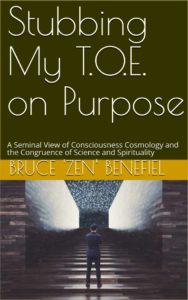 co-created a vision and business plan for a holistic model community serving at-risk youth, called Spectrum Academy. He crafted PlanetaryCitizens.Net to showcase people, places and things aligning with positive change. He spoke at the 2010 International Association for Near Death Studies, realizing a 35-year dream.

Inclusive of his eclectic career were several decades as a performing and studio drummer as well as an extensive reading list. Mr. Benefiel is an author on awareness and performs workshops on bridging worlds, called Quantum Coagulation, designed for a direct experience of inner awareness and spiritual significance. He’s authored several books.

More recently another dream came true, a 27-year one, beginning with a voice mail from Dr. Jeffrey Mishlove directly from this website, sharing an interview on the Greys. Dr. Mishlove was an inspiration for One World. Returning an email with link to a review and a copy of Stubbing My T.O.E. on Purpose, Zen was asked to come talk about it. Below is the first of several interviews recorded on 8/11&12/2018.

Zen resides in Arizona. He has four children and eight grand children. Married again to a cosmic cohort in 2017, his wife, Luba, grew up in St. Petersburg, Russia. A conservatory-trained pianist and piano teacher, her love of quantum physics and the science of vibration fuels their journey together.

Highlights of Decades of Personal Efforts