I’ve been involved with this field for several decades openly and a couple more as an early experiencer of high strangeness. It certainly doesn’t make me an authority, yet I do have some perspectives that few seem to garner as experiencers. I have an above average intelligence, last clocked online at around 151 using my opposite hand just to make it interesting and no rum was involved. My adoptive parents told me early tests were higher and they feared that telling me would turn me into an intellectual snob. Perhaps I have in the minds of some.

Lately there has been yet another flurry of details regarding Unidentified Flying Objects (UFOs), Unidentified Submerged Objects (USOs) and top secret government intelligence programs that have been studying them. Luis Elizondo recently spilled the beans on an obscure government program he was involved in that was tasked with studying the UFO phenomena, AATIP was its acronym. The Advanced Aerospace Threat Identification Program was supposedly led by him. He ‘quit’ the Pentagon because it he was frustrated by the cover-up.

Wow, what a news story that nearly every media outlet picked up on and made Luis an icon in Ufology almost instantly. Was he really involved or, like many, chose to sprinkle some truth in a large lie to get attention? Yes, AATIP existed, and it “did pursue research and investigation into unidentified aerial phenomena,” Pentagon spokesperson Christopher Sherwood was quoted as saying by Keith Kloor, journalist for The Intercept. However, he added: “Mr. Elizondo had no responsibilities with regard to the AATIP program while he worked in OUSDI [the Office of Under Secretary of Defense for Intelligence], up until the time he resigned effective 10/4/2017.”

Luis isn’t the first to muddy the waters in Ufology, though. There is a long history of folks who, with no evidence available other than their word, have forged careers out of elaborate story-telling with details that entice the ears and stimulate the minds of the listeners and readers. Jeffrey Mishlove invited me to discuss the topic in an August 2018 interview he titled ‘The Sociology of Ufology.’ We discussed the tragedy within the field and the travails of those who genuinely seek the truth of whatever is known about our visitors from space.

It seems most of the folks who do have a clue are quiet, reserved and unrecognized by those who find the UFO circuit to provide a means of accolades and notoriety. It’s a small pond in comparison to the larger picture, yet the majority of experiencers are faced with few other opportunities to gather and commune with others of like experiences. The phrase made popular by The X Files, ‘I want to believe,’ now included the necessary discernment skills to weed through the BS. How close are we to really knowing the truth?

In the larger sense, what is the truth about these visitors? We now have irrefutable evidence they exist, specifically military videos as well as officials who’ve had first hand experience, rather sightings, of craft that is obviously not of this world. This evidence has been around for decades in the Ufology circles, yet hadn’t reached the public ears and eyes through major media until this year. Still, there has been evidence that has gone relatively unnoticed from years past. It has been right in front of us, available to find, for decades.

Intelligence of the Visitors

But what of those inside the craft? Who are they and what are they doing? Why are they here and what are their intentions? How do we find out about their intelligence? Do we think the government or major media outlets are going to tells us? Heck, they don’t even know from what many gather. So what is missing? Is there an underground movement, like Dr. Joseph Burkes suggests, that is painstakingly sharing information amongst each other to corroborate and distill general discoveries and potential objectives of these visitors?

It seems that methods of communication vary, mostly telepathic and yet include non-linear and non-local metaphysical-types of temporal distortion or even time-dilation. Events that are perceived as being very physical, when viewed through quantum lenses, are evidence of a multi-dimensional reality much like Neppe and Close describe with their TDVP model of consciousness, time and space being tethered. We have one timeline, yet the experience covers multiple dimensions simultaneously.

Do we need advanced degrees in quantum mechanics to understand it all? Some my think so and certainly there is a lot of math involved in explaining things from a scientific perspective, just like Einstein tried to with his theory of relativity. Jung had many dinners with him over nearly a decade and was greatly influenced by Einstein in the development of his papers on psychiatry. Bertrand Russell was also influenced and noted that to think Einstein’s Theory of Relativity has no philosophical impact was folly. Hans Reichenbach felt that human ‘sensations’ were more, that they were intricately connected to something going on in the universe. 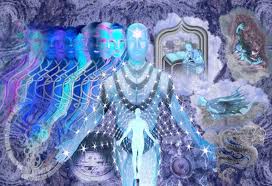 Back to the consciousness that is being expanded by the ‘sensations’ of engagement by non-human intelligence. It spans more than just our visitors engagement of terrestrials. These same sensations are akin to the experience of higher realms of consciousness, often accompanied by a sense of vibration that has been described as both excruciating and/or exhilarating, depending on the frame of mind of the experiencer. So there is a choice involved as to ‘how’ to experience this ‘contact’ as the case may be. If it’s startling with a sense of fear involved, it’s excruciating. On the other hand, if it’s startling with a sense of intrigue or fearlessness, it’s often exhilarating.

Is there a path of logic that fits the scenario of their intent or purpose for engaging humanity in any way? If we looked at things from the perspective of an advanced civilization, what might that be? We tend to see things only through human-centric and fearful eyes, a looming threat. If that were the case, we’d be living in a much different world. Ancient civilizations have learned much, but what? If we are fascinated with the inner-workings of matter and ‘spirit,’ could we posit that this is a general path of evolution and development of intelligence? Where would it take us?

The universe has inherent logic, math and science we have only just begun to understand even in process of entropy to negentropy, from chaos to order. Could it be possible that the communication being delivered through human contacts, interpreted in a variety of ways, is steering us toward recognizing the intricate connections we, in our expanded consciousness, have with everything around us? Consider we’re 99% space, even though we seem physical. What permeates the space we all share? How would we best engage it? Is there a path toward understanding it? What might that be?