On the Spiritual Side - an exploration into early adoption

I’m so thrilled to see the writings of several folks who’ve stood up to explore the greater possibilities of contact and what it might mean for us all. It’s triggered some memories for me and I did a little digging. I’d like to share an article I wrote in 1988 back before the Internet. The article is from a local metaphysical newspaper called Krystal Lighten published in August of 1988.

My eldest daughter’s name happens to be Krystal, so the ‘coincidence’ was very special. She’s a grandmother now.

It was the first article I had published and I’ve included it here with typos corrected. Admittedly, it could be written better. The point is that it’s nearly 30 years ago and we’re just getting to this kind of consideration in Ufology now.

On the Spiritual Side

Have you ever wondered just what is really going on in your life? Would you care to entertain 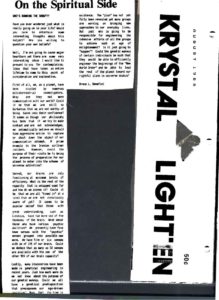 some interesting thoughts about this subject? Are you willing to question your beliefs?

We, I’m not going to cause major heartburn, yet there are some very interesting ideas I would like to present to you for contemplation; ideas that have taken an entire lifetime to come to this point of consideration and explanation.

First of all, we, as a planet, have been visited by numerous exterrestrial investigators. Why are they not more communicative with our world? Could it be that we are still so barbarous that we are not worthy of being taken into their confidence?

It seems as though our philosophy has been that if we try to make contact and are not acknowledged, we automatically believe we should take aggressive action to capture or shoot down the object of our communication attempt. A prime example is the Iranian airliner incident.

However, could the purpose of their visits be to begin the process of preparations for our planet to enter into the scheme of universe activities?

Second, our brains are only functioning at minimum levels of efficiency. What is the rest of the capacity that is untapped used for and how do we access it? Could it be that we are all “tuned in” at a level that we are not consciously aware of yet?

It seems to be popular belief that those with great understanding, such as Einstein, have had more use of the recesses of the brain. What about those who have various psychic abilities? We presently have five known senses with the “psychic” senses grouped into possibly one more.

We have five or six senses with the use of 10% of our brains. Could we deduce that as many as 45 senses are available with the other 90% of our brain capacity?

Lastly, many discoveries have been made in genetic engineering in recent years. Just how much more do we not know about the purpose of our genetic makeup? Could we all have a genetic predisposition that presupposes our ego-driven realities?

Many feel the time is coming for the planet to evolve into the next phase of our existence. The “plan” has not yet fully been revealed yet many groups are working on bringing new approaches to our everyday lives.

But just who is going to be responsible for engineering the cohesive efforts of all the groups to achieve such an age of enlightenment? Is it just going to “happen”?

Could the genetic makeup of certain individuals be such that they would be able to efficiently engineer the beginnings of the “New World Order” and be able to lead the rest of the planet toward our rightful place in universe status?

We’ve reached out to several authors who are respected among peers to become contributing authors here on Ufology Press. We look forward to their participation and are sure you’ll find their articles insightful and investigative. Thanks for your attention.

So many years later, I’ve written a number of books as well. Two of them that are getting great responses are Cosmic Conundrum – Who Am I? and Stubbing My TOE on Purpose. 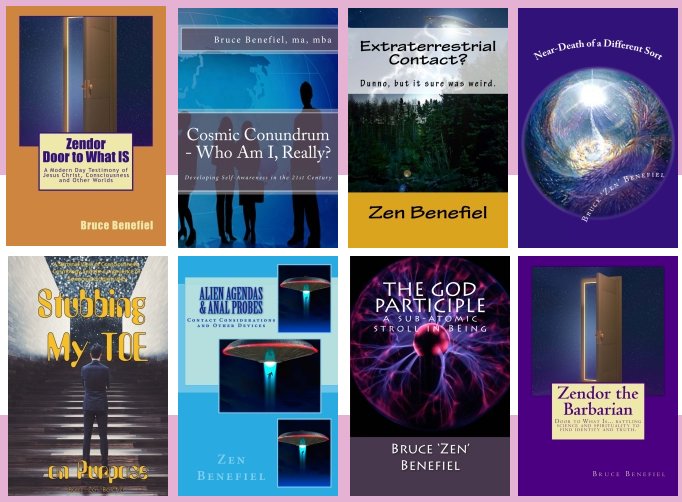