Truth, lies and belief systems are at work.

I think by now we can agree on some basic construction details, the ufo question notwithstanding. Do we seek truth or accepts lies? How do we know the difference? Are we limited by our belief systems? Ala… truth lies, belief systems.

If we want to understand the matrix we have to start small. By small I mean from an atomic

level. We’ve got some building blocks that comprise each atom, with the exception of one and I’ll get into that later.

So we’ve got protons, neutrons and electrons, right? Those are the basic particles, even if they’re just waving as they go by our insensitive eyes. Let us not forget, though, that 99% of each atom is space. We don’t know what is in it, but it’s widely considered that in that space is some kind of consciousness, or a least energy we cannot measure.

It’s also widely accepted that we have a certain almost imperceivable and yet dramatic effect on our experience through our thoughts and feelings. Experiencers report intense shifts in their awareness during events, like their belief systems are suspended for a short time as some inexplicable sensation permeates their being. They cannot describe it completely, yet the most common attempt includes a sense of intense love, even fearlessness.

ON THE OTHER SIDE

I’ve listened to so many conspiracy stories and theories over the years (30 or so). On some level, the probability of at least some of them seems conceivable. There certainly is enough attention on them and far more blogs, groups and websites that promote such things. We’re under threat of something at every turn.

On the level of intention and materialization, the attention given to these things (aberrant as they may be) might well contribute to the manifestation and proliferation of them. I’m sure that is what we all want right? NOT! We need to become more aware and manage our thoughts.

In the last decade or so the town cryers have subsided to a large degree. Instead they are turning to the claims of those who are deemed whistleblowers for most all their information. Those with the most outlandish stories have the loudest voice and apparent credibility based on the amount of attention they get. Of course, they certainly engage the curious and gullible in their stories.

There seems to be a faction of some galactic network that likes to engage local governments and military intelligence to further some agenda no one is really clear on yet. You can take your pick of several scenarios that apparently control people through fear and nanotechnology. Are those off-planet or on-planet scenarios? Meanwhile, appearances of craft are reported from around the world and no direct contact seems to be occurring. If it did, we’d know about it, right?

How do we tell the truth? I suppose how you read that question is where it might start. There are at least two ways to read it. One way is truth telling has a certain vulnerability that comes along with it, an inner looking place that becomes transparent in conversation. The other also has a different kind of vulnerability in seeing things as they are, not how we want them to be.

Back to the future… or is it retrocausality? Some investigators of quantum physics (theorists) look at the possibility of time travel, producing our future ahead of time and then acquiescing to it. For an advanced consciousness that uses much more of its cranial capacity and understanding of universal laws… perhaps involving synchronicity. Currently, to consider such things only serves to distract us from understanding the present moment, imho.

There are resonant fields in the tests of truth, questions that reveal answers that create a sense of vibrational harmony within the human consciousness that is exploring any phenomena to seek understanding of it. These fields create sensations, sublime and subtle, that one can experience and are evident in the vast majority of ‘contact’ events involving an intelligence beyond human.

Before we take a look at what I think are the three essential tests for evaluating any truth-claims, let’s briefly look at some popular, but less than stellar reasons often used by people to test whether or not something is true—the claim and then a response:

1. Instinct — “It seems true to me.”
To this statement we must simply ask . . .
. . . Why?  What is guiding one’s instinctual ability to judge between competing truth-claims?
2. Feelings — “I like the feeling I get.” or “It feels right.”
. . . Can feelings be mistaken?
3. Wish fulfillment — “The God that I (want to) believe in would never send someone to hell.”
. . . Maybe not, but the God one wants to believe in may not be the God who actually exists.  We can never determine objective truth simply by what we want to be true.
4. Custom — “This is the way I / my family / my culture has always been.”
. . . Can they be mistaken?  What if one came from a Nazi background?
5. Popularity contest — “Well, ‘everyone’ believes it.”
. . . Again, can ‘everyone’ be wrong?  Counting noses is never a good means of determining truth.
6. Pragmatism — “It works for me, therefore it must be true.”
. . . However, almost anything can ‘work’ for a time.  Truth works overall.  For instance, a belief may ‘work’ at ridding oneself of guilt by denying it rather than absolving it.
7. Significance — “It gives my life meaning.”
. . . Is the meaning simply the result of wish-fulfillment or is it connected with reality?

Obviously, all of the above reasons for believing something to be true seem deficient and not the best tests to determine whether or not a truth-claim is really true (although, #s 6 & 7 do seem to be better candidates that #s 1-5).  Nevertheless, I think there are three criterion for testing truth-claims which, when used together, offer us the best chances of determining true beliefs.  Here they are.

1.  Internal Coherence — This is a test for rational consistency.  This asks if a belief makes sense?  We need to determine whether beliefs are rationally consistent within themselves and in relation to others beliefs of one’s larger worldview.  Some beliefs are known to be self-referentially inconsistent, or self-defeating.  An example might be the belief that all “knowledge” is scientific knowledge.  This is obviously self-defeating because the belief itself is not a scientific statement.  Therefore, the belief dies by its own standard for knowledge.

Another way a belief can fail this test is when two beliefs are in contradiction with each other, meaning that at least one of the beliefs must be false.  So, we must ask if the beliefs hold together?  For example, if a person is a Naturalist (believing that human life is accidental, random, and without ultimate purpose), he cannot then introduce the belief that we have an objective moral obligation to treat another person justly or with kindness.

Now, while the internal coherence test is essential for determining if something is true, it is not sufficient.  That is, consistency alone does not determine truth.  Consider this example: If Hillary Clinton is President, Bill Clinton is the First Man.  Hillary Clinton is President.  Therefore Bill Clinton is the First Man.  This argument is completely coherent and consistent.  However, it’s not true.  So, we need to add other criterion to the internal coherence test.

Further, the explanatory power of truth-claims should (a) be comprehensive in scope—able to explain more or better than alternative theories; (b) have predictive power—suggesting new evidence and problems; (c) have precision—accounting for more details; (d) be illuminating—integrating otherwise unrelated data; (e) avoid ad hoc hypotheses—functioning only to explain away counter-evidence; (f) be simple—not needlessly multiplying the basic concepts, assumptions, and principles of an explanation.

3.  Functional Adequacy — This tests the livability of a truth-claim as a belief.  Is it a viable belief “on the street”?  Does it work in real life?  Some views sound good on paper, but are proven false in the laboratory of life.  Consider an eastern guru who asserts that the physical world is an illusion, yet he still looks both ways before crossing the street.  A person cannot live out such an illusory belief of the world for very long (or he’ll be hit by a bus before long!).  Even more than that, a belief system must integrate one’s life.  It must incorporate and meet the deepest human needs.

SUMMARY
In evaluating the truth or falsity of  propositions/truth-claims/beliefs, we must be sure to always look for three things: internal coherence (the logical), external correspondence (the factual), and functional adequacy (the livable).  For a belief to be true it must be meaningful, it must line up with the real world, and it must not only help us survive in daily life, but allow us to flourish.  Consequently, these are also the three areas in which our thinking can and does go wrong: logic, facts, and values. 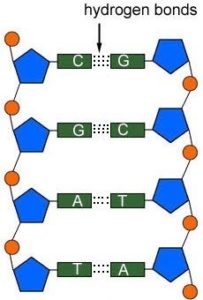 I said I’d get back to it. Every atom, with the exception of hydrogen, has all three components. We know that. What most of us don’t know is that not only does hydrogen fuel our sun, it also is the bonding agent in our DNA. The cosmic connection is more than mere circumstance, yet we don’t understand it yet.

It’s like the protons being hurdled into each other to create a particle that has no mass itself, yet gives mass to others. (Higgs-boson) The more consistent reality is that the explosion would create a rip or hole in the dimensional fabric (M Theory) instead. The ‘repair’ of that hole or rip might then appear as something disappearing, much the same as which scientists believe the Higgs-boson acted. But I digress…

Back to our genetic makeup, specifically our double helix strands of DNA. It is true that we have two hydrogen bonds between A/T base pairs and three between G/C base pairs. Consider the same intelligence behind the creation of solar systems and biological inhabitants of them. There would have to be a connection that bridges the two, right? Is this a possible connection?