Has Anything Really Changed?

So many years ago Mike Wallace interviewed Donald Keyhoe about UFOs and Government coverups. The recommendations of the original focus group to study the UFO phenomena was to reveal everything that had been found to date to the public, then move forward with continued and deeper investigation of the phenomena. Listen in…

Only a short time later…

George Van Tassel, an airport operator and businessman, was interviewed about his contact with ‘others’ in 1964. So, Donald’s reluctance to discuss the ‘contactee’ aspects of the UFO phenomena in his interview, although some had indeed happened, is ‘trumped’ by these experiences of Mr. Van Tassel.

Then there was George Adamski, who also shares some interesting details and events from that era, getting some air time, but not taken too seriously. We all know what that is like.

A decade or so later…

The Brits have been a leader, of sorts, in pretty much everything that involved global expansion. They’ve been doing it for centuries, so it is only logical that the next event was aimed at them. Well, it was a British television station that was interrupted with an important message from an off-planet source.

What have we learned?

The original recommendation to share the information with the public has still not been honored, the military as tight-lipped as ever. It makes it easier for folks to create stories and find an audience in those who delight in any information, true or false. Nonetheless, the Disclosure Movement is continuing to grow through the efforts of Bassett and Greer among others…

There seems to be a tremendous upsurge in the idea that disclosure isn’t necessary. There are enough folks who either claim contact experiences or have evidence enough in how they frame their own questions of incredulity that the believability factor is higher than usual. The Dr. Edgar Mitchell Foundation for Research in Extraterrestrial Encounters even has anonymous surveys that provide the most incredible credible information available about contact experiences.

Perhaps in the next few years or so the acceptability of contact experiences will grow enough to be included in the major ufology gatherings around the world. Some at least have ‘contactee’ opportunities for sharing, but they seem to be more about hypnotherapy needs than direct contact. Make sure to check those events out over in the event scroller on UFOlogyPReSS.

The question still remains: How are we going to learn to get along? In the progression toward a Type I Civilization, our purposeful actions to unite as a planetary society, the considerations are immense, yet begin with the simple notion of harmony among people and planet. What would that look like with no barriers to its fruition? That is what we need to envision. 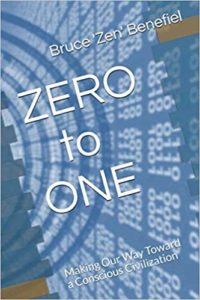 limit for pages. The initial chapter was seeking answers to three questions:

It’s funny how the second question reflects an earlier subtitle to a book published in December of 2012…. A Seminal View of Consciousness, Cosmology and the Congruence of Science and Spirituality. It’s title is now Stubbing My T.O.E. on Purpose. The chapter mentioned above is expanded in the book, ZERO to ONE – Making Our Way Toward a Conscious Civilization and is featured with a link here.