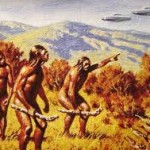 WHAT WILL IT TAKE TO CONVINCE PEOPLE THAT UFOs ARE IMPORTANT?

UFO historian Richard Dolan has described the initial reaction of many people to his passionate interest in the subject. They express interest, might even describe something they saw on TV concerning the phenomenon and then after a few minutes of his well informed explanation, their eyes gloss over and they are clearly bored. What about convincing people about UFOs?

THE ROLE OF AUTHORITY FIGURES

Yes opinion polls indicate the public is interested in UFOs, advertising executives have long known this, but the fascination is for most part quite superficial. Why is this? I suspect partly because of the massive denial of authority figures that say, “there is nothing to it.”

After all, the world is so complex; we rely on authorities to put to use vast amounts of data to make what we hope are reasonable decisions. Most people have little understanding of the technological “miracles” that science has achieved, but they are grateful and trust the devices, like planes, autos and computers to work reliably.

Needing to trust leaders I suspect might be built into our biology. For a million years before civilization was established, hunter-gatherers worked in small groups to survive. Leadership was a question of life and death and those clans that had the best leaders, the shamen and sha-women that knew how best to kill the animals or find the healing herbs and deliver the babies, played a critical role in survival. So we the people have a strong tendency to be,”we the sheeple.”

For the UFO question to take on special importance in the popular imagination it will need to be transformed from an entertaining diversion and become a way of addressing the seemingly insurmountable problems our planet is facing. This is already being attempted by those within the UFO community that discuss the possibility of downloading into our technological culture the secrets of the energy propulsion systems of flying saucers. So-called “free energy” in one fell swoop could eliminate poverty and pollution, thus possibly reversing global warming and ending world hunger.

Of course in order for the so-called ET’s to give us such devices they might understandably insist on a peaceful transformation of our planet to replace what UFOlogist Stanton Friedman has called our perpetual state of “tribal warfare.” This is going to be a hard sell when the mass media and academia in service to their corporate masters repeatedly insist, “There is nothing to it.”

HE WHO PAYS THE PIPER CALLS THE TUNE

From the control groups’ point of view, those of the clandestine forces determined to keep a lid on the UFO issue, an important strategy would be to recruit authority figures to block any significant discussion of flying saucers. Opinion makers who step out of line find that their access to funding cut off. This is all done behind the scenes and is quite effective in my opinion.

In the USA the National Academy of Sciences has made it perfectly clear that UFO studies are not part of the “legitimate” agenda for professional science. Scientists that step out of line will find themselves unable to secure grants thus ending their careers.

In broadcast journalism, talk show hosts that might attempt to inform the public in a detailed way, would find themselves without corporate sponsors. The major newspapers are controlled through their editorial boards that in turn are dependent on corporate sponsors to continue publishing.

This analysis is not a conspiracy theory. I describe the way power works. In the former Soviet Union it was the political dictatorship of the Communist Party that attempted to regulate almost every aspect of people’s lives. That social experiment failed miserably. In the West however social control is far more sophisticated, decentralized and uses the knowledge of social psychology called “public relations” to effectively manipulate the masses.

RESISTANCE TO CHANGE ALSO COMES FROM WITHIN

On the individual level our tendency to identify with our thoughts leads to a profound attachments to old ideas. This resistance to changing one’s point of view flows from the ego itself. People strive to maintain their religion, political ideology, or moral customs to the point where some would even are kill to maintain them. Just look at the present situation in Syria, or at the millions killed centuries ago during the Protestant Reformation in Europe.

So what will it take to change mass public opinion on the flying saucer question? Well mostly it depends on what UFO intelligence chooses to do. If “they” continue the present pattern of interactions, millions of individual sightings yearly, interspersed with occasional massive waves, I imagine that there will be opportunities to slowly build public awareness by a responsible program of education.

This will require UFO enthusiasts to discipline the crazies in our midst, think creatively and most importantly of all build stable, well-financed organizations to carry out the work. All this will need to be done in the face of a powerful opposition of groups that has great experience in controlling public opinion, the economy and their political operatives who run governments.

“TURNING PAGES IN A PLAY BOOK

Can we trust UFO intelligence to follow what we imagine is their existing “game plan?” I suppose not. After all we should never assume that we can think like the so-called “aliens.” The ever-changing pattern of interactions as pointed out by UFO researcher Grant Cameron appears to be as if they are turning the pages of a “play book” with Men in Black in the 1960s, so called “abductions” in the 70s, crop circles in the 80s and continued mental interactions with millions of experiencers many of whom are instilled with a sense of mission and are striving to convince their fellow Earthlings that we should look up and accept what our “lying eyes” are seeing.

My guess is that UFO intelligence will present us with infinitely creative new ways of waking us up from our collective stupor concerning their “wonders in the sky.” I am of the opinion that their presence is non-harmful and very likely to be beneficial to mankind. Bringing others to this hopeful perspective I imagine is a challenge that UFO activists will continue to face for some time.

About the author: Dr Burkes volunteered as a Working Group Coordinator for the CE-5 Initiative from 1992 till 1998 when he left CSETI. He has continued to study the flying saucer phenomenon working with MUFON and the Peruvian contact network now called Rahma. Dr Burkes retired from the Southern California Pemanente Group after thirty years service in 2008. He is a board certified internal medicine physician and is licensed to practice in California.